That Time I Got Cyber Bullied (kinda)

Like every stand up comedian, I was perpetually going through a break up. For this particular edition, I was twenty-one, a senior in college, and on my way to Paris, France for my study abroad trip. After the proper amount of grieving time, I allowed myself to be excited for a six month spree of eating baguettes and living the “Vie d’a La Faire Choissoire” – which, roughly translated from French to English, means “Gibberish”.

I had a good time, got chubby from eating snails and cheese all day, and eventually stumbled upon one of Europe’s many lovelock bridges after a day at the museums with my friends Sara and Anisa. The Lovelock bridges are a staple of the romantic Parisian experience, and although I was happy to be with friends, I was admittedly a little down in the dumps about being dumped. Here I was, in the most romantic place on earth, surrounded by international lovers carving their names in golden and silver padlocks, and I wasn’t in love with anyone.

Being the proud black woman that I keep telling everyone I am, I decided to assert my independence. I saw an empty space amongst the thousands of paired names bound together forever along the railing of the bridge, and I wrote “Alexandria & Herself”. My friends and I thought it was hilarious, so I took a picture of it, and before my classes the following morning, I posted that picture on Reddit, one of the largest image-sharing websites in the world.

By the time I got home from my classes, I was on the front page of Reddit. For the first time, I knew what it was like to be a Kardashian – I was both undeservedly famous and tragically irrelevant. I initially veered away from Reddit’s comment section, but I enjoyed the Reddit fame for the day, and then went along with my business. That is, until I was contacted by a writer from The Huffington Post, who asked to do an interview with me about the Lovelock picture. I weighed the options. I didn’t want to frame myself as a man-hungry, lovesick twenty-one year old spinster. I actually thought what I wrote was pretty cool. I didn’t think I was being some feminist icon by representing myself as a woman who “don’t need no man”, but I figured, hey, maybe another lonely heart will get something out of it. So, I reluctantly said yes.

I asked her, from one (pseudo) journalist to another, to stray away from talking too much about the ultimately unimportant boy who may have inspired the photo. I told her that I was a comedian – don’t worry, she didn’t believe me either – and that I wanted other people to see my name on the bridge and feel content with themselves without the need for another person. That was it, that’s all I told her, and that’s all she wrote. The article was released soon after, and I received some standard acknowledgments from my friends and a VERY awkward text message exchange with a certain ex. It wasn’t until I got a distressing phone call from my mother that I realized the ramifications of my little “artwork”.

My mother had read the article and thought it was a hoot – but then, she did something that no one should ever do: she read the comment section. And they broke her heart.

Now, I’m not a sensitive person. I come from what I like to call the “X-Box Live Generation”. There’s not much that some punk on the internet can say that would hurt my feelings. But boy, did they try. They attacked on Reddit, they attacked on Huffington Post, and wherever else “Alexandria & Herself” could be found. They lamented me for being a tourist and defacing a historical landmark (a solid point, but it was not what I intended to do). I was accused of being a whore, and being selfish for taking up the space that other happy couples could use. I was called a “pathetic cunt” by one user, and while he’s not incorrect, it’s still rude. I am a pathetic cunt, but that’s my personal pet name for myself.

My favorite angry comment to date was from one Redditor that was outraged over my incorrect depiction of an ampersand. To be fair, I deserved that one – mine looked more like a dollar sign.

My mom was beside herself at the thought of her own daughter being cyber-bullied on an international level, and while I wasn’t comfortable reading the comments, I didn’t really feel bullied. In fact, I understood some of the more sensible comments regarding my little art project. I didn’t believe that I was defacing a landmark, as thousands had done it before me. But in some ways they were right, and I took those comments  to heart. However, the less polite comments (and some weirdly sexual ones?) kept coming, much to my mother’s chagrin. But I wasn’t bothered by it.

I am no stranger to bullying. I was an awkward black girl who always talked like she “wants to be white”. Middle school was tough. High school was tougher. Some of the people that bullied me are dear friends of mine now. People grow up, I guess. But I like to think that those internet comments didn’t get to me because after decades of bullying I had finally developed thick skin. And as a stand up comic, thick skin is the second best trait you can have. Besides, you know, telling jokes.

When I picture these internet “bullies” calling me a pathetic cunt and a whore who probably chased away her man (also not entirely untrue), I don’t picture the bullies I had in middle and high school. I see sad, lonely people with nothing else to do but sit behind their computers and make other sad people feel even sadder. I had good reason to be sad at the time, but ultimately, I was a young girl in Paris with her whole life ahead of her. These people who harassed me online for a few days had a crazy amount of anger in their hearts. I couldn’t imagine how unsatisfied one must be with their own lives to criticize another so ruthlessly from behind the safety of an anonymous username. When I think about those people, it doesn’t make me angry. It makes me sad for them.

When I think about my time abroad, I don’t think about the ex boyfriend, the awful internet trolls, or even the copious amounts of baguettes I ate. I think about riding the metro alone, eating at a quiet restaurant, and getting to know myself better. It was the most reflective, peaceful time of my college years – which means that those bullies failed, because I was happy, and they weren’t. I still hope that they find happiness for themselves, like I had to. It’s easier said than done. But for anyone who’s looking for happiness, or an escape from internet trolls, I would suggest starting by shutting down your computer and mobile devices and taking a train alone to a new restaurant in a new city. Maybe Paris. Paris is always a good idea. 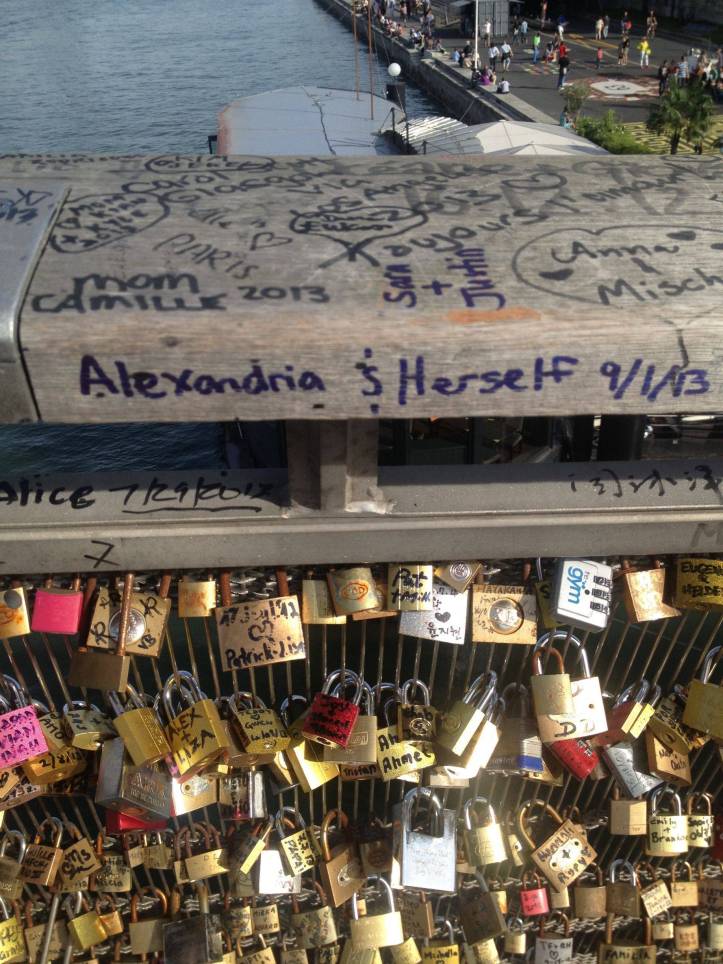 Tell me how unfunny you think I am Cancel reply

Read it and Weep.

Is it me you’re looking for?

Read it and Weep.